Building an Ethical Alternative for our Children

About a year ago, I started worrying about the Boy Scouts. When I was a kid, I was in the Cub Scouts for a year or two, but I quit for a reason I no longer remember, and I hadn’t really thought about them much in the meantime. However, I realized that my boys were getting close to the age when they might want to join the Cub Scouts, and I didn’t know how I would respond to that.

Like many others, I liked some aspects of what the Boy Scouts teach (leadership, outdoor skills, etc.), but am really uncomfortable with other parts (prohibition of gays, “Boy Scouts of America maintains that no member can grow into the best kind of citizen without recognizing an obligation to God.”, etc). I wouldn’t push my kids into scouts, but what if they wanted to join? Would I let them join an organization that would teach them that their father could not be a good citizen?

Instead, I decided to try to find an acceptable alternative, or to create one if I couldn’t find one.

Fortunately, I’m a member of the Ethical Society of St. Louis, a large community of mostly liberal-minded humanists, including other young families. I started talking to other parents in the Society, and I found that they tackled it in various ways within their own families: some had skipped Scouts completely, others had participated in Scouts with gritted teeth, and other were happily involved in the Scouts. Overall, there were a lot of families seeking an alternative.

In June 2012, I started leading meetings among parents to try to decide what we were looking for and if the idea was worth pursuing. To my surprise, everyone wanted to get started as soon as possible, to have weekly meetings to get the organization rolling, and to start having outings before we really even had a name. So, in August, we had a morning hike in a local park combined with campfire skills lessons at someone’s house in the afternoon. And in September, we had a full weekend of camping and hiking at a nearby state park with around 40 people showing up.

Obviously, the interest was in place, and the time was right. Once the idea was brought up, the group formed quickly. The idea was at critical mass, and it just needed a catalyst.

At the same time as we were planning outings, we also started investigating alternatives to the Boy Scouts. We knew that we wanted an organization that was inclusive of all races, religious perspectives, and sexual and gender orientations. We also decided to look for a co-ed organization because we wanted to provide an equal opportunity to all of our children, even if the motivation was driven only by the policies of the Boy Scouts (the Girl Scouts of the USA* have inclusive policies that would have worked for us; we really wish the Boy Scouts would follow their lead).

We started out looking at about a half-dozen organizations, but we quickly narrowed our consideration to two: Navigators USA and Baden-Powell Service Association (BPSA).

Both groups had the same objections to Boy Scout policies that we had, and both had made the adjustments that we considered necessary to be ethical and inclusive. Unfortunately, both are significantly smaller than BSA, so neither has the resources or prestige of the larger group, but we were willing to make that sacrifice. It’s more important to us to help build an inclusive organization than to fit into an established organization that required ethical compromises.

We spent a lot of time looking at our two options, and we had advocates for each in our group, but we ended up deciding to apply to join Navigators. I think we could have been successful with either organization, but the focus on humanism and diversity born out of an urban environment made Navigators a better fit for us.

So, now we’re Chapter 33 of a small-but-growing national organization. The Ethical Society is our enthusiastic sponsoring organization, and we’ve found at least one other Chapter in the area with whom we can interact. We’ve had outings every month for the past year, and we’ve had three general meetings. Next month, we’re planning to have our official kick-off meeting, with actual membership, registration, dues, simple uniforms, and the whole shebang.

Although Navigators USA has programming for ages 7-18, we have interested families with children younger than that and also adults from the Ethical Society who don’t have kids in the program who want outdoor fun. In response, we created a “Stargazers” group for kids 2-6 and a “Travelers” group for adults. This way, we build on the experience and guidance that Navigators provides for the core ages but expand the offerings to suit our needs.

We’re very fortunate to have a lot of experienced leadership within our group; at least three parents were previously scoutmasters for either Girl Scouts or Boy Scouts. I’m helping a lot with organizational details, but those experienced adults are the ones who make our meetings and outings a success. 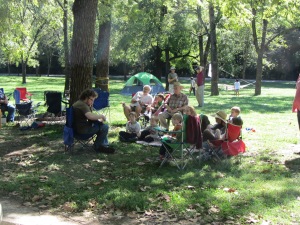 Learning at the Campfire 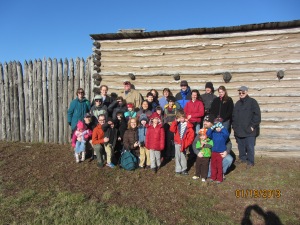 As a Navigator I promise to do my best to create a world free of prejudice and ignorance. To treat people of every race, creed, lifestyle and ability with dignity and respect. To strengthen my body and improve my mind to reach my full potential. To protect our planet and preserve our freedom.

*Update: I originally had their name wrong; thanks to a commenter for pointing this out.

Father of two boys, Angular/TypeScript developer, Ethical Humanist, and world traveler (when I can sneak it in). Contributor to Grounded Parents.
View all posts by Lance Finney →
This entry was posted in Other and tagged Ethical, Ethical Society, Inclusive, Navigators USA, Scouting. Bookmark the permalink.

10 Responses to Building an Ethical Alternative for our Children